Their Eyes Were Watching God: A Novel

Use this referral Link From My Black City

At the height of the Harlem Renaissance during the 1930s, Zora Neale Hurston was the preeminent black woman writer in the United States. She was a sometime-collaborator with Langston Hughes and a fierce rival of Richard Wright. Her stories appeared in major magazines, she consulted on Hollywood screenplays, and she penned four novels, an autobiography, countless essays, and two books on black mythology. Yet by the late 1950s, Hurston was living in obscurity, working as a maid in a Florida hotel. She died in 1960 in a Welfare home, was buried in an unmarked grave, and quickly faded from literary consciousness until 1975 when Alice Walker almost single-handedly revived interest in her work.

Of Hurston’s fiction, Their Eyes Were Watching God is arguably the best-known and perhaps the most controversial. The novel follows the fortunes of Janie Crawford, a woman living in the black town of Eaton, Florida. Hurston sets up her characters and her locale in the first chapter, which, along with the last, acts as a framing device for the story of Janie’s life. Unlike Wright and Ralph Ellison, Hurston does not write explicitly about black people in the context of a white world–a fact that earned her scathing criticism from the social realists–but she doesn’t ignore the impact of black-white relations either: It was the time for sitting on porches beside the road. It was the time to hear things and talk. These sitters had been tongueless, earless, eyeless conveniences all day long. Mules and other brutes had occupied their skins. But now, the sun and the bossman were gone, so the skins felt powerful and human. They became lords of sounds and lesser things. They passed nations through their mouths. They sat in judgment. One person the citizens of Eaton are inclined to judge is Janie Crawford, who has married three men and been tried for the murder of one of them. Janie feels no compulsion to justify herself to the town, but she does explain herself to her friend, Phoeby, with the implicit understanding that Phoeby can “tell ’em what Ah say if you wants to. Dat’s just de same as me ’cause mah tongue is in mah friend’s mouf.”

Hurston’s use of dialect enraged other African American writers such as Wright, who accused her of pandering to white readers by giving them the black stereotypes they expected. Decades later, however, outrage has been replaced by admiration for her depictions of black life, and especially the lives of black women. In Their Eyes Were Watching God Zora Neale Hurston breathes humanity into both her men and women, and allows them to speak in their own voices. –Alix Wilber

Ships at a distance have every man’s wish on board. For some they come in with the tide. For others they sail forever on the horizon, never out of sight, never landing until the Watcher turns his eyes away in resignation, his dreams mocked to death by Time. That is the life of men.

The people all saw her come because it was sundown. The sun was gone, but he had left his footprints in the sky. It was the time for sitting on porches beside the road. It was the time to hear things and talk. These sitters had been tongueless, earless, eyeless conveniences all day long. Mules and other brutes had occupied their skins. But now, the sun and the bossman were gone, so the skins felt powerful and human. They became lords of sounds and lesser things. They passed nations through their mouths. They sat in judgment.

Seeing the woman as she was made them remember the envy they had stored up from other times. So they chewed up the back parts of their minds and swallowed with relish. They made burning statements with questions, and killing tools out of laughs. It was mass cruelty. A mood come alive, Words walking without masters; walking altogether like harmony in a song.

“What she doin coming back here in dem overhalls? Can’t she find no dress to put on? – Where’s dat blue satin dress she left here in? – Where all dat money her husband took and died and left her? – What dat ole forty year ole ‘oman doin’ wid her hair swingin’ down her back lak some young gal? Where she left dat young lad of a boy she went off here wid? – Thought she was going to marry? – Where he left her? – What he done wid all her money? – Betcha he off wid some gal so young she ain’t even got no hairs – why she don’t stay in her class?”

When she got to where they were she turned her face on the bander log and spoke. They scrambled a noisy “good evenin'” and left their mouths setting open and their ears full of hope. Her speech was pleasant enough, but she kept walking straight on to her gate. The porch couldn’t talk for looking.

The men noticed her firm buttocks like she had grape fruits in her hip pockets; the great rope of black hair swinging to her waist and unraveling in the wind like a plume; then her pugnacious breasts trying to b ore holes in her shirt. They, the men, were saving with the mind what they lost with the eye. The women took the faded shirt and muddy overalls and laid them away for remembrance. It was a weapon against her strength and if it turned out of no significance, still it was a hope that she might fall to their level some day.

But nobody moved, nobody spoke, nobody even thought to swallow spit until after her gate slammed behind her.

Pearl Stone opened her mouth and laughed real hard because she didn’t know what else to do. She fell all over Mrs. Sumpkins while she laughed. Mrs. Sumpkins snorted violently and sucked her teeth.

“Humph! Y’all let her worry yuh. You ain’t like me. Ah ain’t got her to study ’bout. If she ain’t got manners enough to stop and let folks know how she been malkin’ out, let her g’wan! ”

“She ain’t even worth talkin’ after,” Lulu Moss drawled through her nose. “She sits high, but she looks low. Dat’s what Ah say ’bout dese ole women runnin’ after young boys.”

Pheoby Watson hitched her rocking chair forward before she spoke. “Well, nobody don’t know if it’s anything to tell or not. Me, Ah’m her best friend, and Ah don’t know.”

“Maybe us don’t know into things lak, you do, but we all know how she went ‘way from here and us sho seen her come back. ‘Tain’t no use in your tryin’ to cloak no ole woman lak Janie Starks, Pheoby, friend or no friend.”

“At dat she ain’t so ole as some of y’all dat’s talking.”

“She’s way past forty to my knowledge, Pheoby.”

“No more’n forty at de outside.”

“Tea Cake ain’t been no boy for some time. He’s round thirty his ownself.”

“Don’t keer what it was, she could stop and say a few words with us. She act like we done done something to her,” Pearl Stone complained. “She de one been doin’ wrong.”

“You mean, you mad ’cause she didn’t stop and tell us all her business; Anyhow, what you ever know her to do so bad as y’all make out? The worst thing Ah ever knowedher to do was taking a few years offa her age and dat ain’t never harmed nobody. Y’all makes me tired. De way you talkin’ you’d think de folks in dis town didn’t do nothin’ in de bed ‘cept praise de Lawd. You have to ‘scuse me, ’cause Ah’m bound to go take her some supper.” Pheoby stood up sharply.

“Don’t mind us,” Lulu smiled, “just go right ahead, us can mind yo’ house for you till you git back. Mah supper is done. You bettah go see how she feel. You kin let de rest of us know.”

Excerpted from Their Eyes Were Watching Godby Hurston, Zora Neale Excerpted by permission.
All rights reserved. No part of this excerpt may be reproduced or reprinted without permission in writing from the publisher.
Excerpts are provided by Dial-A-Book Inc. solely for the personal use of visitors to this web site.Copyright © 2003Jill Churchill
All right reserved.

Zora Neale Hurston, the author of Their Eyes Were Watching God, was deemed “one of the greatest writers of our time” by Toni Morrison. With the publication of Lies and Other Tall Tales, The Skull Talks Back, and What’s the Hurry, Fox? new generations will be introduced to Hurston’s legacy. She was born in Notasulga, Alabama, in 1891, and died in 1960.

“There is no book more important to me than this one.” —Alice WalkerA

Nora Zeale Hurston’s notable story comes to life through Ruby Dee’s fine interpretation. The story of Janie Crawford, her strength and gentleness, was written to be heard. Dee’s deep, melodic tones enliven Hurston’s evocative prose and powerful images. The colorful characters, Janie’s three husbands, Mr. Killicks, Mayor Starks and Tea Cake, her friend Phoeby, and so many others emerge through Dee’s strong command of dialogue and her mastery of dialect. She conveys Hurston’s sense of drama and spiritual strength in a dynamic program. For readers who know Hurston’s work, this program will be a joy, for those who are lucky and wise enough to discover her here, it will be an exceptional experience. R.F.W. An AUDIOFILE Earphones Award winner (c)AudioFile, Portland, Maine

From the Back Cover

“Belongs in the category … of enduring American literature.” — Saturday Review Fair and long-legged, independent and articulate, Janie Crawford sets out to be her own person — no mean feat for a black woman in the ’30s. Janie’s quest for identity takes her through three marriages and into a journey back to her roots.

From the Inside Flap

Their Eyes Were Watching God, an American classic, is a luminous and haunting novel about Janie Crawford, a Southern black woman in the 1930s whose journey from a free-spirited girl to a woman of independence and substance has inspired writers and readers for close to seventy years.

This poetic, graceful love story, rooted in black folk traditions and steeped in mythic realism, celebrates, boldly and brilliantly, African-American culture and heritage. And in a powerful, mesmerizing narrative, it pays quiet tribute to a black woman, who, though constricted by the times, still demanded to be heard.

Originally published in 1937, Their Eyes Were Watching God met significant commercial but divided critical acclaim. Somewhat forgotten after her death, Zora Neale Hurston was rediscovered by a number of black authors in the late 1960s and early 1970s, and reintroduced to a greater readership by Alice Walker in her 1972 essay In Search of Zora Neale Hurston, written for Ms. magazine. Long out of print, the book was reissued after a petition was circulated at the Modern Language Association Convention in 1975, and nearly three decades later Their Eyes Were Watching God is considered a seminal novel of American fiction.

With a new foreword by the celebrated novelist Edwidge Danticat — author of Eyes, Breath, Memory; The Farming of Bones; and Krik?Krak! — this edition of Their Eyes Were Watching God commemorates the singular, inimitable voice in America’s literary canon and highlights its unusual publication history. 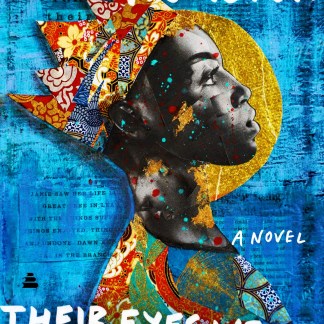 Their Eyes Were Watching God: A Novel